Blog
You are here: Home1 / Blog2 / Blog Posts3 / What do hockey and farming have in common?

How we attract the next generation to play on our teams

One of the constant struggles on the farm is finding and keeping good people. For too long, farm work has been considered menial, low paying work. In Saskatchewan, we lose many potential employees to the oil and gas sector, which has traditionally paid better and offered career progression.

In a way, I think we’ve partially done it to ourselves. Historically, farms haven’t treated their employees as an investment, but rather, as a cost. Why would you want to work for a farm operation that doesn’t reward you financially, offer benefits or provide a roadmap for advancement and possibly management?

I’m no marketing expert, but I think we need to work on changing the image of farming for young people in Canada – let’s swap the checkered shirt for a hoodie and farm boots for Converse. This is a generation that has constant access to information with the touch of a button and has a keen interest in ag tech and innovation.

I look at my kids who are so tech-savvy it blows me away. They can and will have the choice to pursue whatever career they choose, but I sure want our farm to be an option for them. And for that to happen it has to be “cool” and interesting enough for them to feel the pull back to the farm, the same way I did.  I always joke that my job is to give the kids the opportunity to go to Harvard, but to create an operation with interesting enough career offers to be side by side with an investment bank, multi-national company, etc.

Statistics show there will be 120,000 open positions by 2025 in agriculture, and there’s a growing worldwide demand for food. A survey of farm operators has found that 41 percent of producers could not recruit a sufficient number of workers in 2020. Quite simply, if I can’t find good people, I can’t ramp up production and grow more.

I recently heard Luree Williamson, with Ag for Life, speak at Cultivate Ag Summit in Calgary in April. Her presentation resonated with me as she has a good pulse on what young people today are looking for.

“Today’s young workers are interested in making a positive change in the world; they don’t have to be farm kids. They’ve grown up with a cell phone in hand; they will easily adopt/create technology for the farm. We need to mentor them along, while too many farmers are holding on,” she says.

Luree says the “next gen” workforce wants to feel like they are part of something bigger and engage in meaningful work.

“When you look at the major societal issues we’re facing today – food security, gender equality, eliminating poverty and climate change – it all relates back to agriculture and how it can be a solution provider. The next generation are smart, critical thinkers and can be the champions of this industry.”

Jour-ney-man: (noun) a worker, skilled in a given building trade or craft, who has successfully completed an official apprenticeship qualification. Journeymen are considered competent and authorized to work in that field as a fully qualified employee

Many young people graduate from high school and immediately progress into working on a farm. We would argue that’s the wrong way to go about it. We encourage post-secondary education, combined with apprenticeship or co-op, work experience in industry or other farms before returning to the family farm, at which time there should be continuous learning.

We have coined the term, Journeyman farmer, as a model for our organization. We believe good employees will want to work for an organization that values them and recognizes their input. After all, that’s why you hired them in the first place.

At Hebert Group, we compare our organization to a hockey team. Rather than a top-down corporate approach, we operate much like a sports team. Yes, there’s a coach, but he or she doesn’t put skates on and play the game. The defense plays a completely different, but equally important role as the offence. No team would win without a goaltender.

I’ve never wanted to be an agronomist, so I hired a great one. Despite being an accountant, I don’t want to pour over spreadsheets all day, so I hired my good friend and fellow CPA Evan Shout as our Chief Financial Officer. My best advice is to loosen the reins a little and let good people do what they’re best at. Empower your team to score the goals.

Have a career, not just a job

AT HGV, we continue to improve our employee hours and overtime, we’ve started offering benefits, pension and profit share in the company. We have weekly meetings with our team and I 100% want to hear their ideas, how we can make things better or run more smoothly. Our employees are all in and they have skin in the game.

Here’s the chart we follow that shows the career progression from operators, to management and for some, eventually partners. We openly share this with new employees so they can envision their future with us. When people see it, they can believe it. 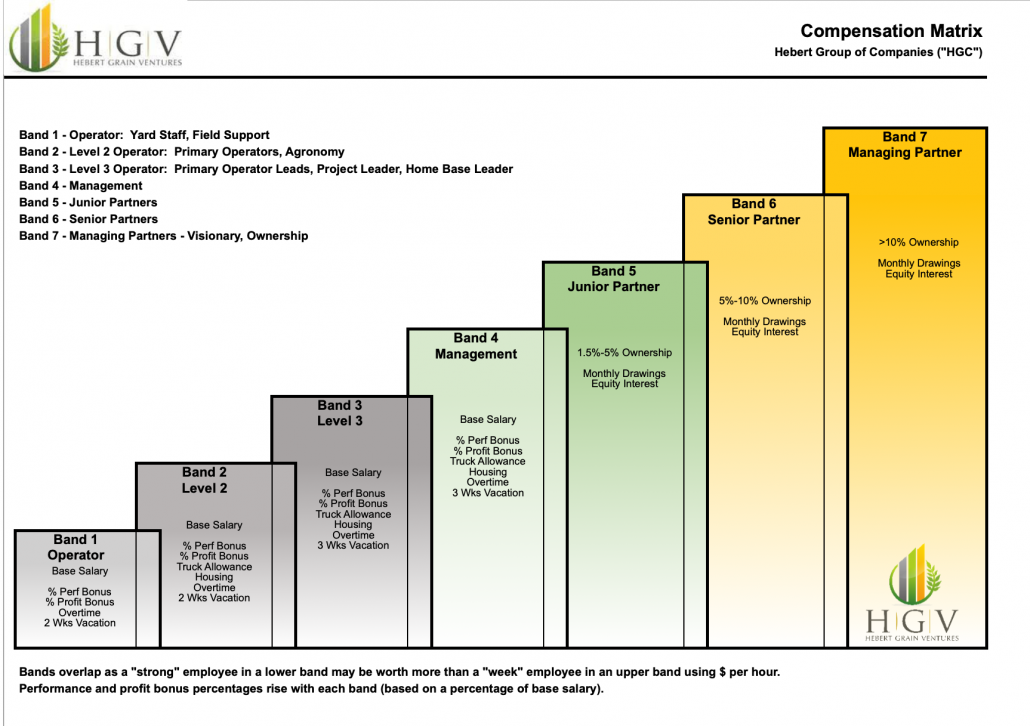 For as long as I can remember, my dad hired international workers and I still do today. I think it’s so important to see how the rest of the world farms – what things do we have in common, what things are different and how can we learn from one another?

Foreign labour represents a critical source of agricultural labour today – statistics show in 2021, there were just over 60,000 foreign workers working in Canadian agriculture. Recent changes to the program are a step in the right direction – the feds recently increased the Temporary Foreign Worker cap from 10% to 30% and extended the length of stay from 180 to 270 days. However, I would advocate that what we really need is a more permanent solution; the jobs created by agriculture are not temporary and our industry needs a long-term solution.  We need the visa process to be SIMPLE for these workers to get to Canadian farms. This is something I would urge our province and our country to work on!

It’s a challenge that many farmers constantly struggle with – having enough work in the slow seasons and enough workers in the busy seasons. It’s true that many Canadians aren’t interested or willing to work on farms, despite jobs being available. So, it’s up to us as farm operators to make a career in agriculture a meaningful, rewarding and well-paying one. I strongly believe, and see it on our farm daily, that employees are content and loyal when they feel seen, heard and acknowledged and know they’re part of something bigger – a winning team.