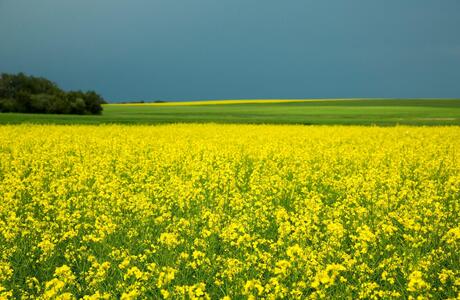 There was another positive announcement for Canada’s agriculture industry recently. As Canada’s (maybe even North America’s) largest canola producer, it makes sense that Saskatchewan is becoming a central hub for canola crush facilities.

The canola crushing and biodiesel refinery being built north of Regina is a joint venture partnership by Federated Co-op Ltd. and AGT Foods. It’s an important collaboration, and something I’d like to see more of in the agricultural community.

Including the recent FCL-AGT announcement, there have been billions of dollars announced by major heavyweights in the industry over the last year. As a canola grower, I’m encouraged by JRI’s commitment to double the size of their facility, Ceres just announced a new facility on the Saskatchewan-North Dakota border, in addition to the new Viterra and Cargill plants in Regina.

I’m not even sure we can grow enough canola to meet this demand. Hats off to private industry, the government and all of those working hard to grow Canada’s value-added processing industry.

The canola will also be used in renewable diesel production – most of the diesel produced in Canada is made in Regina. Clean technology + value add is a win-win.

As a country, we’re far away from our major export markets, traditionally China. Up until about a decade ago, we shipped bulk commodities to California and/or China to be processed. Gradually, the thinking shifted. Canadian producers and the government started to realize that it was more beneficial to extract the value of the processing here in Canada and then ship the refined products. Creating a central hub of value-added canola crushing with two ports on either side (BC and Thunder Bay) is a success story and something we can do for a variety of other products.  The Roquette Pea Protein Plant in Portage, P & H flour mills, as well as the Barley Malting facilities are just some examples.

I am one of many in this country who believe there is untapped potential for Canada’s value-added processing industry, as was noted in the Made in Canada report.

There have been calls from the Canadian Agrifood Policy Institute (CAPI) to implement a national strategy and federal investment to attract large international processing facilities that serve domestic and international markets. I do believe we’re seeing the results of these efforts, but I still think there’s room to grow. I’d love to see us replicate the success of what we’ve done with canola crush.

The benefit to farmers is evident – freight and elevation costs are substantially decreased and more of the end-user price goes back to farmers. It goes without saying, you can ship a lot more refined product (canola meal and oil) than you can bulk product.

There are also huge benefits to the local economy. The FCL-AGT announcement will translate into 4.5 billion in direct and indirect benefits, 2500 construction jobs and 150 permanent jobs when the facility opens in 2027.

Will the money flow into rural Saskatchewan?

Where is all this canola coming from? It’s being grown by farmers who are raising families and trying their hardest to make a living in rural prairie towns that some days seem to be dying.

I’m disheartened when I hear about families having to move to the city for better health care, education or recreational facilities. Farm help is hard to find and our ability to run a successful and profitable operation gets put in jeopardy.

So, how can we ensure the money and investment dollars also flow into rural Saskatchewan? I’m passionate about finding ways to keep our rural communities vibrant and growing and would love to hear your ideas.

I know our provincial government and Economic Development Regina are aware of the issues and are working hard to solve them, hopefully, sooner rather than later.  However, we need to feed these groups ideas on how to keep improving our rural economy versus waiting for them to figure it out.

We still have international purchasers that want our bulk commodity, so competition has been created between domestic crush and international markets – that’s the good news.

Now, it’s up to governments to keep investing and ensuring that foreign markets still want Canadian products. There needs to be a concerted effort to keep the Canadian brand strong and to create a predictable trading environment for Canadian genetically modified crop exports, like canola. Transparent, science-based trade rules will help ensure Canadian farmers are treated fairly when exporting to global markets.

Let’s hope our government can ensure our markets are growing and the science around GM canola remains sound.

If we can’t sell our canola, it’s not worth anything to anybody.